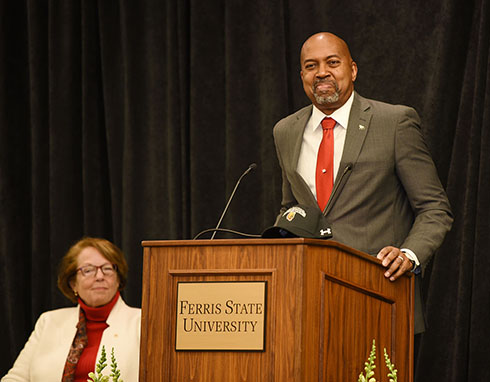 Ferris State University’s Board of Trustees has unanimously voted to name Bill Pink as its 19th and next president during official action at its regularly-scheduled board meeting on Friday, May 6, in Big Rapids.

Pink, currently the president of Grand Rapids Community College, will become the first African-American president in Ferris’ 138-year history after previously becoming GRCC’s first African American president in its 100-plus-year history in May 2017. Following the trustees’ official vote, Pink expressed gratitude in the confidence the board has placed in him to become the university’s next president, following in the footsteps of David L. Eisler, the current president, who is retiring after serving 19 years of leadership at Ferris.

“I am grateful to the Board of Trustees for the honor they have given me and the confidence they have in me to become the next president of Ferris State University,” Pink said. “Ferris has a long and proud tradition in higher education that extends more than 135 years. Ferris embodies its core values of collaboration, diversity, ethical community, excellence, learning and opportunity. These foundational principles will be at the heart of the work we continue to do moving Ferris forward. I also thank Dr. David Eisler for his many years of guiding the university.”

Board of Trustees Chair Amna Seibold, on behalf of her fellow trustees, announced Pink as the selected finalist to become the next Ferris president on Monday, March 28. That announcement capped a comprehensive national search with input from a search advisory committee that included participation from students, alumni, faculty, staff, the community and the trustees. Seibold has high praise for Pink, who will officially assume the presidency on Monday, July 11.

“Today’s vote by the Board of Trustees reaffirms the confidence we have in Dr. Pink as he is now officially the next president of Ferris State University,” Seibold said. “While there is significant work ahead, we’re united in our confidence in Dr. Pink as the right person to take on the challenge of leading Ferris into the future.”

With the process now completed, Pink looks forward to the work ahead as he prepares to step in as Ferris’ next president.

“When I was named the selected finalist in March, I was overwhelmed by so many warm welcomes and well wishes that have made me and my family all the more excited to join the Ferris State community,” Pink said. Bill and his wife, Lori, have two children, Lance and Lydia. Lance is married to his wife, Kayla, and they have a son, Nate. “I very much look forward to meeting with our students, faculty, staff, alumni and community members and talking more about how together we can build upon the impactful work and momentum at Ferris and take the university to new heights.”